Miami continues to make "BEST CITIES" lists from all kinds of publications and studies and we are here to share the good news.  Miami is a global hub after all and people are paying attention!

Miami ranked No. 8 among best U.S. cities for Startups

According to CommercialCafe.com, Miami is number 8 for startups with population below 500k. The top 10 include country's most affordable cities in which to live and start a business, and which have a growing entrepreneurial scene and diverse economy.

Magic City ranks eighth among U.S. urban centers with population below 500,000. Miami landed top spot for startup survival rate and for slow wage growth. We estimated that in 2018, 69% of new firms with up to four employees remained active past their first year. According to the most recent BLS data, wages for computer, mathematical, architecture, and engineering occupations in Miami increased an average $575 in five years, marking the slowest wage growth in this group. With an 11.4% increase in the number of residents holding a Science and Engineering bachelor’s degree or higher, Miami came in second for tech ed growth.

Miami ranked No. 6 for best cities for Business Travel 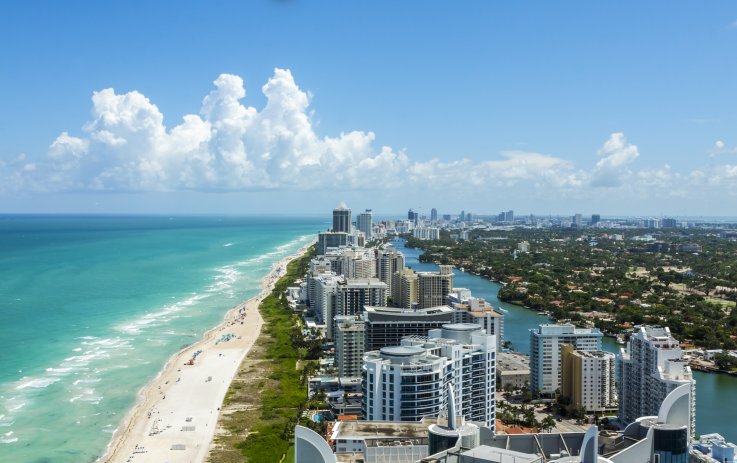 Miami puts the sun and fun in bleisure travel.ULORA/GETTY

According to Newsweek and a new study by the financial planning company, Fundera, Miami is No. 6 for best city for in the United States for business travel. The study reports (with research by Expedia), that 60% of travelers extend business trips for leisure purposes.  The study identifies "bleisure" travelers (business + leisure) that take an average of six business trips per year and of course, destination matters more than ever.

Factors that determine the top 10 cities include:

You might associate Miami more with beaches and parties than you would with a business meeting, but several factors make this city one of 2019's top business travel destinations. The city has 859 hotels, which go for an average of $209 per night. The number of dining and entertainment establishments—36,751—are disproportionately high for a 55-square-mile city, so there's no shortage of things to do with your team or with clients.

The Miami International Airport is fewer than 8 miles from downtown and a relatively short, half hour drive. As you might expect, car culture dominates in Miami. You won't have any problem finding a taxi or rideshare vehicle, but you can't always rely on public transit. Miami has a 500,000-square-foot convention center minutes away from beaches, you won't have trouble attracting a crowd for your next event. With more and more travelers mixing business and pleasure, access to a beautiful climate and beaches only enhances Miami's appeal.

2021 proved to be an amazing year for Keystone Point Real Estate and we can agree that "record breaking" doesn't even begin to describe it.  Whether you were on the buying or selling side, you know Keystone Point will... more

A lot of you will be reading this thinking its a bit boring (at least Rick thinks so), but I wanted to address this because a lot of our Miami Beach Real Estate customers are constantly asking us about certain elements  of... more

Miamism Sales Team - professionalism and marketing skills second to none

It's never easy being involved in an estate sale when a family needs to deal with the sale of a home in the midst of dealing with the loss of a loved one.  Thank you so much Liz, for trusting us and for the beautiful... more

2021 was a record breaking year for Surfside Real Estate as well as many other markets across South Florida and the rest of the nation.  Prices are still soaring because of persistent lack of inventory as well as high buyer... more

6 months 1 week ago
Ines Hegedus-Garcia
@ines
@gahlord @WonderlandK LOL - do I have to fly the boat anywhere in particular? 😂😂

6 months 1 week ago
Ines Hegedus-Garcia
@ines
Looking forward to the best PropTech conference of the year!! It's not too late to register https://t.co/kwGvu0vbjK… https://t.co/jJckH20tPA

6 months 1 week ago
Ines Hegedus-Garcia
@ines
@LoCoHeather @ErikaGracey Rocco can open mine with his - should we be concerned?